Oh boy, it has been a long time since I’ve written one of these posts. Even longer since the trip has happened! ^^” But hey, better late than never right? (I think this can become a new slogan for this blog, 😂)

Anywho, if this is the first time you’ve just stumbled across my blog, welcome! Here is the first part of this amazing adventure in Japan last June (2016): [June in Japan] Day 1 in Kyoto

Previously, on our adventure: [June in Japan] Day 5 in Tokyo (second day subway-ing)

Let’s get cracking on.

We could afford another late start to the day so I think we must have left our AirBnB after 10am. We still aimed to still be early enough to use the subway pass one last time to Tokyo station. (It being 48-hour rather than 2-day so we can still use it on the 3rd day as long as it’s before the time we start using it on the 1st day. Perks!)

We headed to Tokyo station so I can buy more goodies and to check out the Character Street underneath the JR Station.

We were hungry and since there is also a Ramen Street there, we had ramen for brunch. (Because it was late enough to be brunch, lol.) Tonkotsu ramen is my favourite and I believe this restaurant is called Ore-Shiki Jun.

We actually walked around a bit to try and decide which ramen restaurant to go for and i think one or two weren’t open yet. I kind of wanted to try another type of ramen just to expand my pallet but Ore-Shiki Jun caught our eyes the most. It wasn’t out of this world good (because I don’t remember much of it) but it was pretty decent.

After refueling, we walked around Tokyo station and I bought quite a bit of goodies which I’ll show at the end of this entry.

From my photos, we then hopped onto JR trains to get to…

Harajuku~ Yeap, again. lol However! There is a valid reason why we ended up in Harajuku again (other than the fact that it’s one of my favourite places in Tokyo).

Another must-have at Takeshita street in Harajuku, crepe! Managed to get lune to have one as well. She didn’t want any until she saw that there was a tiramisu one and she ended up having that, lol.

The funny thing about these crepes is that I wasn’t that keen on them the first couple of times I visited Tokyo. I thought all of them would have lots and lots of whipped cream in there and I’m not the biggest fan of whipped cream.

Anyway, here’s the reason why we came to Harajuku again: 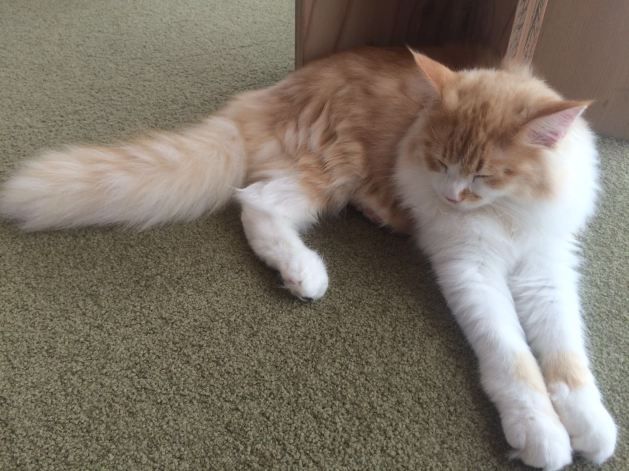 For the cat cafe! It’s called Mocha Cat Cafe and there are several branches of them around Tokyo. I find the Harajuku one the easiest to find because I’m so familiar with the area hence this choice.

We also chose Mocha Cat Cafe, even though it is a bit pricey, because there’s enough information on their websites and their cafe in English. 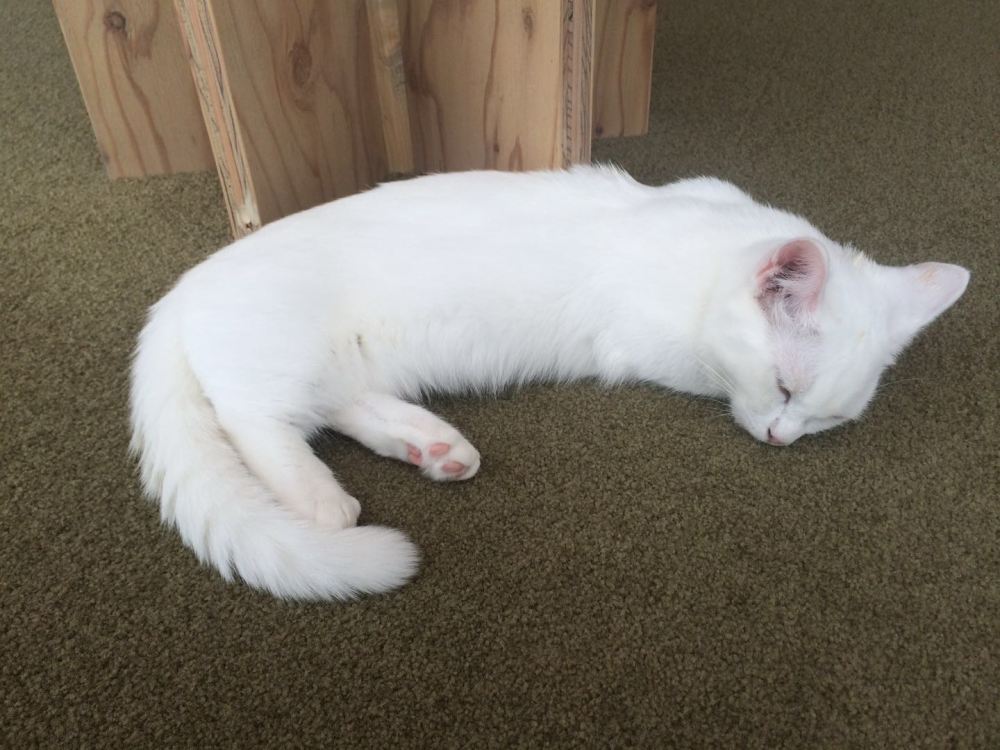 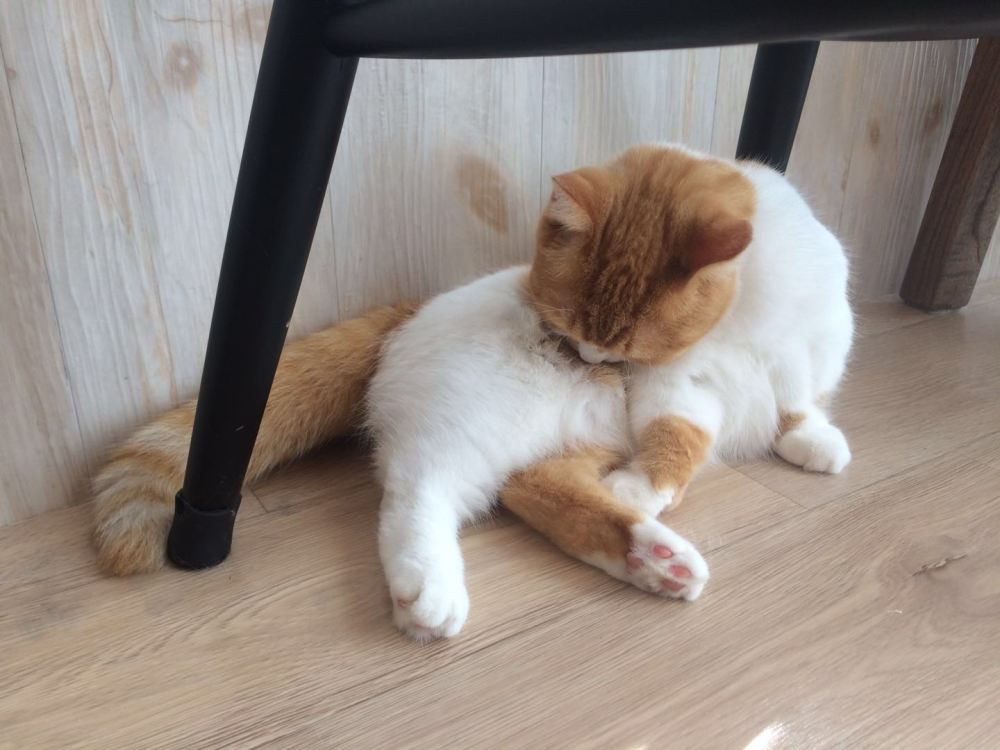 There were also quite a few people around as well so there wasn’t a lot of space to just lounge. 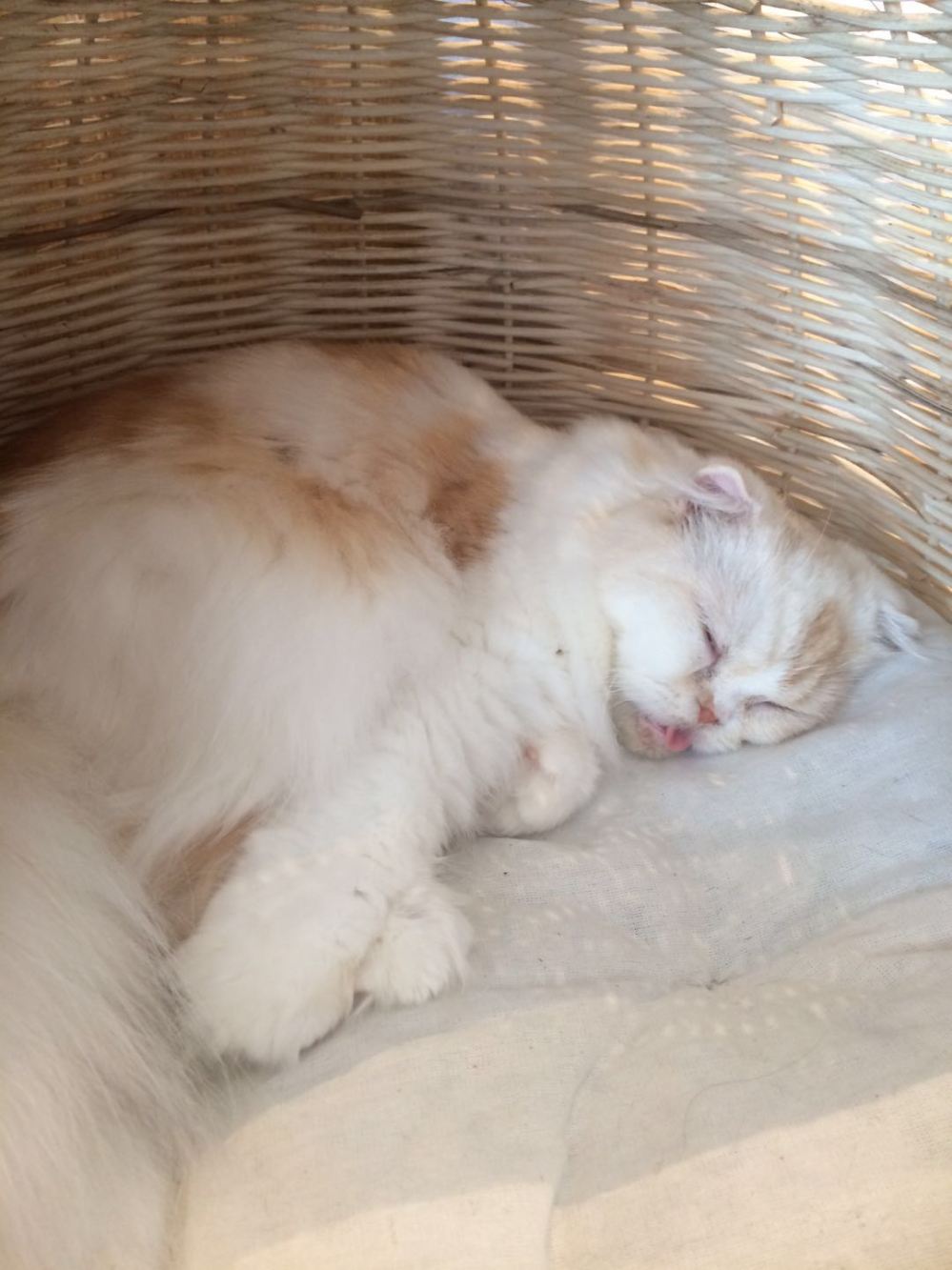 I think we both went for the price that included unlimited drinks, but you really don’t need to. Plus, we were pretty full so we didn’t have that many drinks either…

After Harajuku, we hopped onto the JR train to come to Shinjuku because I was on a hunt for drip-coffee for my dad. There’s a picture below to show how many packs I bought. xD

After my success with the coffee, it was dinner time!

We tried to find a Japanese curry restaurant in Shinjuku. There must be at least one but we couldn’t find it. So in the end, we settled for okonomiyaki (Japanese pizza) instead.

We had to order 2 because there were 2 of us so we went for cheese and seafood I think. The cheese one was very good with pork and pesto sauce!

This seafood one was a classic too. We were very full by the end of dinner.

It was still pretty light when we came out after dinner, even though it was close to 7pm. Bless long summer days. 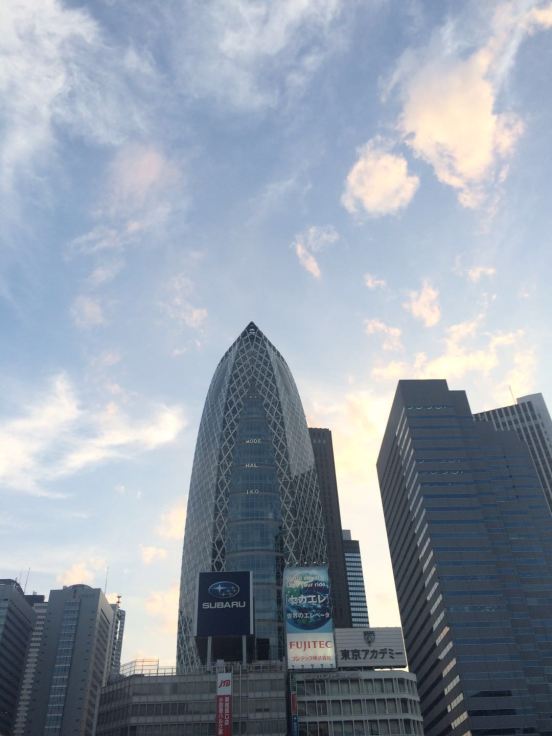 It was a pretty chill day, we also had a full, fun day ahead of us so we headed back to our AirBnB.

I bought quite a bit of snacks today so here are the pics!

But it’s always worth it though and I always have to get them every time I’m in Tokyo. -^^-

Here’s another Tokyo Banana brand snack, but I believe it was the summer’s special. The filling inside is custard and cream cheese I think. It was pretty tasty. 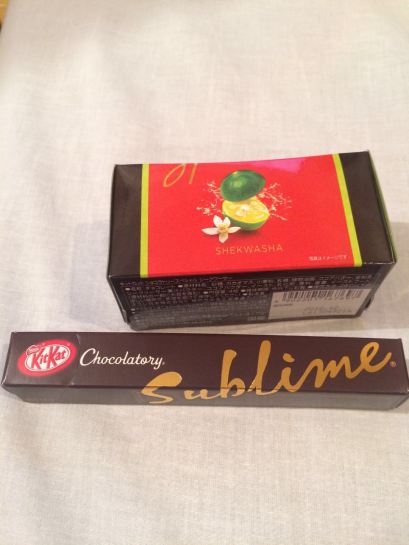 Above: shekwasha (which is a type of tangerine) flavour Below: Dark chocolate sublime Kit-Kat

There’s also a fancy Kit-Kat kiosk at Daimaru department store in Tokyo station and I picked up these 2 things. I love dark chocolate Kit-Kat so I had to pick the sublime one up. The shekwasha looked interesting and I think it was dark chocolate as well so I tried one. I don’t think it made that good of an impression on me because I have no recollection of how it tasted like. 😂

And here are how many pack of coffee I bought back for dad. 😂

I’d say it was a pretty chill day for us, we started pretty late and ended the day before the sun has set. However, we still managed to walk more than 10km! I’m quite happy with that.

PS – finally finish this entry! ^^” I want to post this tonight since it’s the night of the super blue blood moon. I had to google it up why it’s called this. It’s a blue moon because it’s the second full moon in this calendar month. It’s a super moon because it’s close to the Earth. And it’s a blood moon because there’s a lunar eclipse that makes the moon appears to be a red colour! Pretty impressive. Especially since I can see it from my bedroom window! Can’t believe my luck…

I wanted to make an entry on the real day this year, and even though it was on a Sunday (14 Jan), I still managed to procrastinate enough to not get around to it! My excuse is that I had packing to do for a 5-day work trip but still, it’s mainly because inspiration hadn’t struck.

Anywho, who would have thought that I would still be here, 2 years later! Albeit with a lot less regularity in posting but I believe I’ve posted more entries last year than the first! (Mostly because of the 30 day writing challenge, lol.)

There are 46 entries in total in the second year so I suppose I have to make it a mission to post more than 46 entries in this coming year. This is looking to be more daunting… May be I have to bite a bullet and do another 30 day writing challenge… We’ll see.

Anyway, there’s really isn’t much to update on at the moment. This past week has been quite tiring. The work trip took us to Khao Yai and even though the temperature in the morning was great, the facility was a bit… basic.

I didn’t really sleep that well for all 4 nights and even though the activities during the day weren’t too strenuous for me, I was still exhausted by the end of the trip. I missed my hot shower and bed very much, thank you.

Not that it wasn’t a good trip, I’m glad I’ve done it. It was a great chance to get to know more people better and outside of our workplace. But I’m glad I’m back home last night. Crashed before 9pm (which was later than I expected) and spending all day at home today. I think the full night sleep last night kept me from getting ill so that’s good.

Anyway, I’m going to go and switch my brain off again now. I think I’ve earned it, xD.

Hope you are all having a lovely weekend!

Happy New Year folks! I hope you all had a lovely start to 2018. Mine was actually pretty good. I normally sleep through the countdown but this year, we stayed up to catch the firework which could be seen from my own balcony!

It was pretty sweet but then I was probably a bit dehydrated and did not get enough sleep so woke up with a pounding headache. I don’t drink and never had a hangover before even when I did drink, but I suspect that was what being hungover felt like. It was horrible.

So I spent the afternoon finishing up binge-watching Stranger Things 2!

And then yesterday, I’ve invited uni friends and co over to my flat to just hang out and play Wii games. There were about 12 of us in total and we ordered Lebanese food in and just had fun. We caught up and laughed and teased and now have more inside jokes. It was fantastic.

I feel a bit crappy today but that’s probably because I’m tired and did not have my first cup of tea until nearly 10am, which was a disgrace. But hey ho. Will have an early night tonight and start waking up early now so my body won’t have so much of a shock comes next week.

So yeah, it hasn’t been a shabby start to the new year at all. If anything, I got to spend time with family and friends, which is one of the most enjoyable things for me.

I hope your 2018 turns out to be an awesome year and that you are having a great week so far. Happy Wednesday!

PS – I binge-watched Stranger Thing over the New Year period. Started on 30 Dec and watched the whole of season 1 in one sitting. Could not stop myself. I tried to watched season 2 in one day again on the 31st but I was out during the day to go see Jumanji: Welcome to the Jungle and then we had relatives in the flat so I couldn’t actually hear some of the dialogues so I gave up after episode 4. Hence it took me 2 days to finish off the second season. But it was effing brilliant.

The cast is absolutely phenomenal, the story line was tight and I love me some sci-fi. The drama was a tad bit too much for me but I love the character developments. Spoiler alert! Especially Steve Harrington’s. The number of memes I’ve come across and loved about Steve being a mom to all those kids at the end of season 2 is now my life.

Here are some of my favourite buzzfeed articles:

21 Times “Stranger Things 2” Made You Laugh Despite Everything

36 “Stranger Things 2” Facts For All You Addicts Out There

PPS – Jumanji: Welcome to the Jungle was way better than I anticipated. I wanted to go see it because I love the original and this one has quite a cast (Dwayne ‘The Rock’ Johnson, Karen Gillan, Kevin Hart, Jack Black and Nick Jonas to name the main ones).

Again, spoiler alert! It really exceeded my expectation. I really liked how they had these big actors playing teenager characters. They were all awesome, especially Jack Black. Then the jokes. All of the jokes! There were so many of them and the references to all things relevant in 2017. Felt like I’ve made the right decision going to see this film in the cinema. My last film of the year! Woo!