Today, I bring with me a whole heaps of photos to take you all through my day at Universal Studio Japan.

We planned to leave quite early to make the most out of the day. Because I checked on hyperdia, I found out a shorter way to commute to USJ from our hotel in Namba. We had to switch from the metro to JR line, but it was without any hassle with the Suica card we had.

I believe we stopped by a convenient store (may be Family Mart because that was right on top of our subway exit) to grab a quick breakfast which we ate on the way. Though, actually, I have a memory of eating a hot breakfast burrito by the train platform so may be we stopped by at 7/11…

Anyway, we arrived at the Universal station around 8ish which was slightly later than we planned but the park wasn’t opened quite yet. 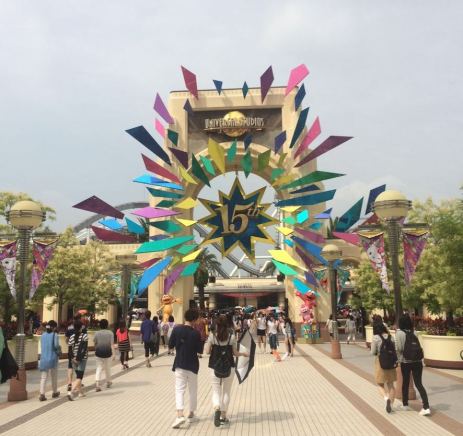 Special decoration for their 15th year!

(I remembered from the last time I went there in April 2015 that even though I arrived before the park’s opening time on the website, I could hear screams from the roller coaster already as well as staying past the closing time on the website so I questioned how reliable the information was on the official website itself.)

Waiting for the park to open. There were many other people who came early just like us…

Lune had bought the park ticket as well as the Express pass for both of us from Thailand in advance so we didn’t have to queue up to buy a ticket. 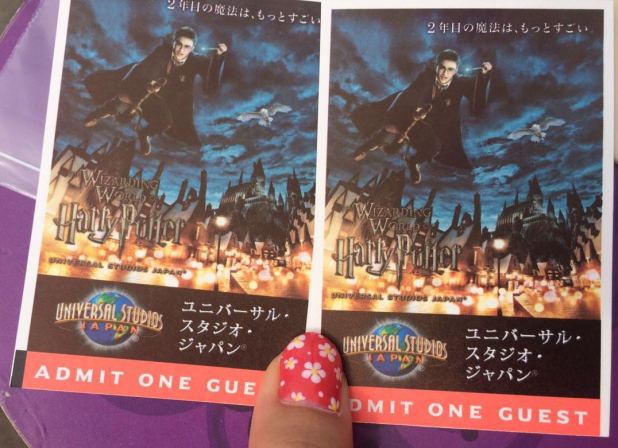 Yay for Harry Potter design one! This is the entry ticket. The Express pass came as a print out A4 with a QR code the staff could scan.

The reason why we bought the ticket before hand was so that we could buy the Express pass.

The last time (which was my first time) I came to USJ, I didn’t buy any Express pass, thinking that I wouldn’t want to spend more money just to cut the queue. However, I was very intrigued to see how much more time I would save if I did buy the Express pass so we gave it a go this time around.

And well, it was worth it.

We went for the Express 7 Pass ~Backdrop~ because the Express 4 didn’t seem enough and I really wanted to try the Backdrop this time around. The queueing really was almost non-existence with the 7 rides we could enter with the Express pass so we had plenty of time to walk around, browse the shop and take photos. It also came with an entry time for the Wizarding World of Harry Potter which sometimes required a time ticket. If you only bought the park entry ticket, you’d have to go get the time ticket at the booths near the entrance to the Wizarding World of Harry Potter to get a designated time before you can go in.

Or this was what happened when I went in April 2015. It didn’t turn out quite like this this time around…

But we are getting ahead of ourselves. Let’s get back to the beginning first.

So we queued up and slowly made our way in after 8.30am when the park opened. Our first ride was going to be The Flying Dinosaur which is a new attraction for the 15th Anniversary.

However, I thought that we might not be able to go back into the Wizarding World of Harry Potter after we come out the first time so I thought we’d try to get a time ticket for an evening slot just in case. So we walked all the way to the Rose garden to find out that we didn’t need a time ticket for that day. *fail*

Here’s a link to the Studio Map if anyone is interested.

Anyway, we finally made it to The Flying Dinosaur before 9am and decided to go with the Single Rider option for less queueing time. This is the one thing I like about amusement park in Japan, not sure if they have this option at other countries but I’ve never seen them before until in Japan.

It’s for filling a spare seat or two so they won’t be wasted. So even if I went with Lune, I wouldn’t get to sit next to her. The line is shorter so less queueing time though, even if it’s you can’t really say how long it will be because it really depends on the people in the normal queue and how many people are in each group.

Anyway, we went with the single rider queue and only waited for less than half an hour to get on the ride. We were lucky enough to be on the same train but in different row.

I didn’t realise that the seat would really move so that if felt like you were being carried face down towards the ground. I kept tensing because I was scared that the seat wouldn’t hold me and I would fall face first to whatever it was beneath me. Irrational, I know. But still.

I think it was because I was so tensed, as well as the seat arrangement, the ride actually made me more nauseous than usual. One time experience really was enough for both lune and I…

After that, we decided to go on the Jurassic Park – The Ride because it was right next to The Flying Dinosaur.

We also had the Express pass which meant almost no queueing at all 😀 yay~ The last time I went there, I surprisingly liked the Jurassic Park ride even though I hadn’t really seen the films at all.

This time, I was (and still am) a fangirl of the franchise. I went to the Jurassic World in the cinema (Chris Pratt and his raptor squad…) and came home wanting to watch the original trilogy and did. So I was able to immerse myself in the ride way more than last time.

And here’s to what we had been looking forward to since… probably forever ;p

What is this picture of the forest you say? Well…

Can I take this train to Hogwarts please? Pretty please?

The place was busy but not too crowded.

Because a time ticket wasn’t needed to enter The Wizarding World of Harry Potter, we went into the area around 10am. We had to wait until nearly 11am for our designated time for the Harry Potter and the Forbidden Journey in 4K3D ride (what a mouthful! xD), so we walked around from shop to shop to browse through merchandises.

As we strolled further into the area, we came to one magnificent sight…

When the time came, we went to the Express pass entrance and was quickly ushered into the Castle itself.

Harry Potter and the Forbidden Journey in 4K3D

The Forbidden Journey ride (I ain’t gonna say the full name again, too long!) was a bit better than my first time. Probably because I was trying to be as relaxed as possible and tried not to focus my eyes on one thing in particular. I was more gazing dazedly at everything during the ride xD

After that, we went on the Flight of the Hippogriff straightaway. Again, with the help of the Express Pass, we didn’t really have to queue at all. Whoop!

We browsed around the shops some more, spent some money and decided that we were hungry after all! xD

It was lunch time 🙂

We’d decided before even going to USJ that we would have lunch at the Three Broomsticks. I didn’t eat here when I visited the first time and so felt like I needed to make up for that xD

Inside the Three Broomsticks…

There was a bit of a queue (surprise, surprise) to get into the restaurant but we didn’t have to wait too long. I took this chance to take quite a few photos as well as upload them up onto my social media 8D Bless pocket wifi.

For lunch, I went for this chicken and pork ribs platter (because I kind of wanted to try both roast chicken and the BBQ ribs). Sadly, the chicken was too dried. The ribs were ok, I would have liked to have some vegetable too. The corn cob was a bit too much for me…

I also got dessert because I’d always wanted to know what Harry’s favourite dessert tasted like.

Now this, I would get again. I think it would have been perfect with a cup of tea. (Mmmmm.) The treacle filling was sweet, chewy and I could taste a hint of lemon zest. It went extremely well with the creamy clotted cream and the sharpness of the raspberry cut through and helped lifted the dish up. I especially liked the part near the crust that was a bit burnt. Om nom nom.

And… my laptop is now down to 29% and it’s nearly my bed time… I didn’t realise that it would take me this long to write a post on our day at USJ so I am splitting it into 2 parts! ^^”

And hopefully, the next part will come soon-ish. Not tomorrow though, tomorrow is packed full D: And then Friday is for going out (xD) and there may be plans for Saturday… So we shall see, lol.

Hope you guys are having a good (and less busy) week!